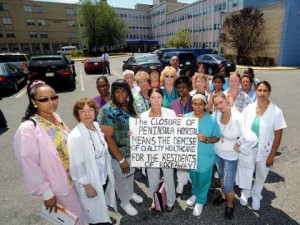 New York – The Queens’ Peninsula Hospital Center is set to close 90 days after state officials confirm a closure plan for the 200-bed hospital. Report said that the hospital is saddled with $60 million debt.

On Wednesday night, hospital workers and members of the community who may be affected by the closure held a three-hour candlelight vigil in front of the hospital to stave off the closure of the 104-year-old hospital.

According to a Filipino nurse, more than the nurses and hospital workers who are poised to lose jobs, over 100,000 local residents in Queens, Brooklyn and Nassau County, many of them poor, will be hit hard if Peninsula is shut down.

“We are all very worried about our family because we cannot afford to be unemployed in the middle of recession.”

MediSys Health Network, which owns the Peninsula Hospital, said the company has many debts and is having big losses in Medicaid funding.

“Regarding employees and what jobs can be saved, we are working with many different parties, as well as the [state Health Department], to put a plan together that best serves the health care of the community,” MediSys spokesman Ole Pedersen said.

“[We have] attempted to make the Peninsula Hospital financially viable in the current difficult economic market. [But without] a long-term solution that puts the hospital on the path to fiscal recovery, an organized closure may be the only option,” Pedersen added.

According to Queens president Helen Marshall, the Peninsula Hospital may be the fifth to close in Queens in less than a decade, following St. Joseph’s, Parkway, St. John’s Queens, and Mary Immaculate.