What you need to know about Semen Analysis

Liza and her friends were hanging out in a coffee shop, studying for next week’s major exams. Just when she was about to take a sip from her cup of coffee, she overheard the couple sitting next to their table talking. She was trying so hard not to listen, but their voices did not make it easier for her. They were talking about wanting to have baby. Based on what she heard, they’ve been trying for long but still, no baby.

“The doctor said I need to undergo semen analysis,” the man says and Liza’s interest increased at the mention of the test which is familiar yet vague to her. She has read about that once in her nursing books, but she didn’t really pay attention to it. Now, she wished she did. The couple continued talking about it, whether the man really had to participate in it while Liza ransacks her mind on what little she knew about the procedure. What’s it for again? And how is it done?

Also known as a sperm count test, semen analysis is a procedure which analyzes the health and viability of a man’s sperm. Semen is the fluid containing sperm as well as other sugar and protein substances that’s released during male ejaculation. Basically, it measures how much semen a man produces as well as shows the number and quality of sperm in the semen sample. Specifically, this test measures three major factors of sperm health:

Doctors usually conduct two or three separate sperm analyses to get a good idea of sperm’s health. The American Association for Clinical Chemistry (AACC) states that the tests should be conducted at least seven days apart and over the course of two to three months.

It should also be noted that sperm counts can vary on a daily basis and taking an average of the sperm samples can give the most definite result.

Why it is done

This test is usually one of the first tests done to help find out if a man has a problem fathering a child or in other terms, infertility, since a problem with the semen or sperm affects more than one-third of couples who are infertile.

This procedure is typically done to find out if:

Other tests that may be done during sperm count

Tests that may be done during a semen analysis include:

Preparation for the procedure:

To get the best sample, the patient should be advised to:

How the procedure is done 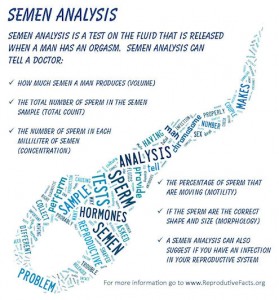 The four main ways to collect a semen sample are:

To get a good testing sample, the semen must be kept at body temperature since if it gets too warm or too cold, the results will be inaccurate. Additionally, the semen must be delivered to the testing facility within 30 to 60 minutes of leaving the body.

A laboratory specialist then looks at the sample within 2 hours of the collection. The earlier the sample is analyzed, the more reliable the results. The following things will be evaluated:

Results of a semen analysis are usually available within a day. Normal values may vary from lab to lab.Some laboratories use different measurements or may test different specimens.

For a normal result, more than 50 percent of sperm must move normally an hour after ejaculation. Sperm movement, or motility, is important to fertility because sperm must travel to fertilize an egg. An automated system analyzes the sperm for movement and rates them on a scale of 0 to 4. A score of 0 means the sperm are not moving, and a score of 3 or 4 represents good movement.

It should take 15 to 30 minutes before semen liquefies. While semen is initially thick, its ability to liquefy, or turn to a watery consistency, helps sperm to move. If semen does not liquefy in 15 to 30 minutes, fertility could be affected.

The sperm count in a normal semen analysis should be between 20 million to over 200 million. This result is also known as sperm density. If this number is low, conceiving can be more difficult.

It is not completely clear how these values and other results from a semen analysis should be interpreted, but an abnormal result does not always mean there is a problem with a man’s ability to have children.

Abnormal results could indicate the following:

If the results come back at abnormal levels, the doctor will probably suggest that the patient take additional tests. These tests include: