Taking it to another level: Wireless Capsule Endoscopy

Through the years, technology has inched its way into human lives. It has created an impact so big that it has become a necessity. Take for example cellular phones and cameras. Who would’ve thought those things would become “must-haves” when it comes to daily living? Cellphones for communication and cameras to capture moments forever. It’s a wonder how these technologies were invented and how much they affect human lives.

Tina smiles as she takes a selfie using her smart phone, thinking how awesome it is to capture one of her happiest moments in her summer vacation. Amazing how with just one click, one moment is immortalized forever. One camera, thousands of memories. And oh, how could she forget the video feature that would record what’s happening around her if she wanted to? She smiles to herself as she indulges herself in viewing previous photos and videos she took earlier. 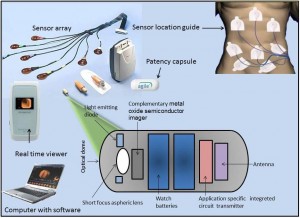 So, the ability of doctors to see into our internal organs isn’t fresh news anymore. Throughout the years, this innovation with using small tubes and cameras has created wonders that helped the health care profession and helped in improving patient care. But what would one say if this “capturing everything inside of us” is taken to a whole new level? Let’s say wireless?

Capsule endoscopy is defined as a procedure that uses a tiny wireless camera to take pictures of your digestive tract. This so-called camera sits inside a vitamin-sized capsule that the patient swallows. As the capsule travels through one’s digestive tract, the camera takes thousands of pictures that are transmitted to a recorder the patient wear on a belt around the waist or over the shoulder.

The small intestine has been a difficult organ in which to make diagnoses and treat without performing surgery, but with the use of capsule endoscopy, doctors may now see inside a person’s small intestine (which isn’t easily reached with conventional endoscopy). This procedure can be used by adults and by children who can swallow the capsule.

This improved diagnostic and therapeutic capability in the small intestine is very useful, especially in uncovering the causes of abdominal pain, diarrhea, and anemia due to intestinal loss of blood and diagnosing diseases that may involve only the small intestine, for example, Crohn’s disease. Also, capsule endoscopy can provide better imaging of the lining of the small intestine than can other tests.

Usually, this is ordered for patients with:

However, like any other procedure, there are risks that come with wireless capsule endoscopy such as:

In this procedure, the intestines are first cleared of residual food and bacterial debris with the use of laxatives and/or purges very similar to the laxatives and purges used before colonoscopy. Then, a large capsulecontaining one or two video chips (cameras), a light bulb, a battery, and a radio transmitter is swallowed by the patient. As the capsule travels through the esophagus, stomach, and small intestine, it takes photographs rapidly. The photographs are then transmitted by the radio transmitter to a small receiver that is wornon the waist ofthe patient who is undergoing the capsule endoscopy.

At the end of the procedure, which is approximately 8 hours later, the photographs are downloaded from the receiver into a computer, and the images are reviewed by a physician. The capsule is passed by the patient into the toilet and flushed away.

The body may expel the camera capsule within hours, or it may be expelled after several days depending on the person’s digestive system. If the patient doesn’t see the capsule in the toilet within two weeks, a health care professional must be contacted and an X-ray may be ordered to see if the capsule is still in the body.