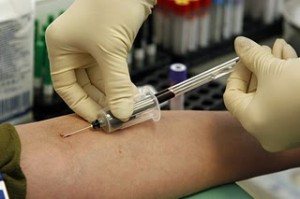 Glycosylated hemoglobin test indicates the average plasma glucose concentration over two (2) to three (3) months. The word “glycosylated” denotes the attachment of a blood glucose molecule to hemoglobin. It is abbreviated as HbA1c. Normally, the result ranges from 4% – 8%. In people with poorly controlled serum glucose levels (diabetes), the levels are markedly elevated.

Red blood cells (RBCs) contain an iron bearing protein called hemoglobin. Hemoglobin molecules contain amino acid chains and are responsible for the carrying and transportation of oxygen from the blood. When blood sugar rises, a glucose molecule would attach itself to hemoglobin inside an erythrocyte, the hemoglobin is now called glycosylated or glycated hemoglobin (glycohemoglobin). 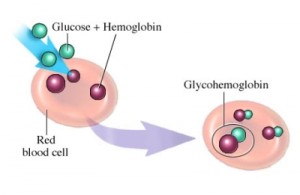 glucose attaching itself to hemoglobin molecules

Once hemoglobin is glycosylated (glucose attaching to hemoglobin) it remains that way for the entire life span of a red blood cell. Since the life cycle of an erythrocyte is 120 days, the glycosylated hemoglobin value detects glucose levels for about 120 days or 3 months.

The duration of hyperglycemia, determines the amount of glucose that attaches to hemoglobin. If the elevated sugar level stays for a longer period in the blood, higher glycosylated hemoglobin would be the result.  In cases where episodes of blood glucose elevation are intermittent or infrequent and the person a near-normal blood glucose level, the total value of HbA1c would also not be greatly increased. On the other hand, if hyperglycemic occurrence is frequent and persistent, the test result will significantly rise.

Some patients are monitoring their blood glucose levels at home by using a special reagent strip and allowing a drop of blood to remain in it for about 1 minute (60 seconds) and visually comparing the color change of the strip to the standardized color code in the container. Others are using a glucometer where the strip is just inserted in a device and a digital display will show the serum glucose levels. With these self-monitoring tests, the blood glucose determined is during the time the procedure is done only (short term). Patient who have high glycosylated hemoglobin but are mostly obtaining normal results with self-monitoring tests at home might have a mistake with the methods executed. These instances include the flowing:

HbA1c or HbA1 is not affected by sudden changes in blood glucose levels. For instance if a patient has had an episode of hyperglycemia but has managed to keep his sugar level normal or near-normal most of the time, the glycosylated hemoglobin result will most likely be good. It is like a student who is top of the class. This intelligent individual got 7 out of 10 in one of the quizzes but most of the time he gets the perfect rating. At the end of the semester, he is still ranked as the best in his class. Glycosylated hemoglobin works this way. It evaluates not the short-term changes but rather the overall effectiveness of long-term therapy for diabetes and how well the person is doing in controlling the disease.

In addition, a diabetes control card is helpful in interpreting the results obtain with glycosylated hemoglobin test.