IELTS examination is also designed to test a candidate’s ability to produce pieces of writing for a relatively short period of time. The test consists of two parts and is different in each version of IELTS examination. 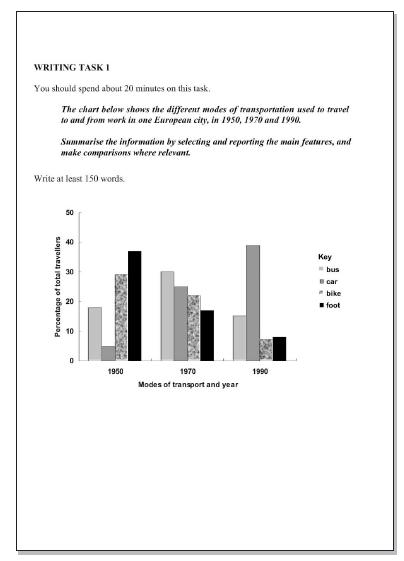 An examinee is given one hour (60 minutes) to complete the two tasks. All candidates are required to write at least 150 words for Task 1 where they are advised to spend only 20 minutes for this part to allot more time for the Task 2. In the second part, the candidate is required to write at least 250 words. Both pieces of writing are submitted after one hour. If you can finish your task 1 for 30 minutes, be sure to finish writing the next part for half an hour. However, keep in mind during the test that Task 2 has a higher weight in scoring than that of Task 1.

There are two parts in this module and differences are noted in each version of IELTS examination. However, the pieces of writing should be in formal style for both types.

TASK 1: In this part, graphs, diagrams, charts (pie, bar, line, etc) or tables are presented. The candidate is asked to summarize, describe or explain the given data in his or her own words. A descriptive report is required in Task 2 by describing processes, comparing relevant data or discussing how something works. A mistake commonly committed in this task is when the candidates attempts to interpret the data provided.

TASK 2: In this section, a point of view of a problem or argument is presented. The candidate is asked to produce a 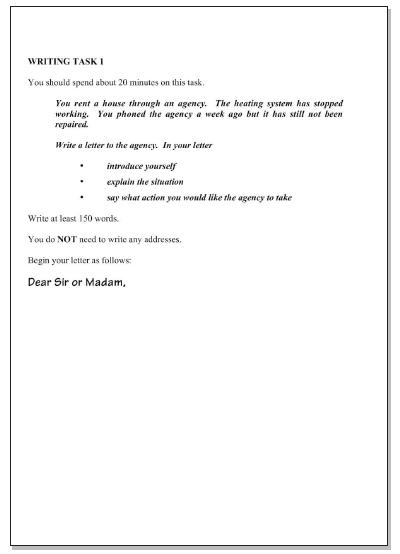 written argument in response to the issue given by providing reasons for his or her idea and presenting relevant examples if possible. Subjects or issues raised in this task are of general interest which is appropriate and clearly understood by the professional candidates planning to enter a postgraduate study or professional registration in other countries. The second section is longer than the other that’s why you are advised to spend 40 minutes in completing the task.

TASK 1: This part involves writing a letter from a given situation. The letter in personal, semi-formal or formal forms should focus on requesting for information or explaining an incident.

TASK 2: Unlike the academic version, the essay in this section for GT cab slightly more personal. The examinees are asked to produce a paper in response to a point of view, problem or argument.  Still the topics are of general interest.

Writing Task 2 weighs twice as much as Task 1 to the writing score, therefore, avoid spending too much time on the first part. But do not neglect Task 1 also. Some candidates start writing with the second task. It is entirely up to you to budget your time for 1 hour and choose which are you going to work first. Writing legibly is also vital to pass the test. Even if the data organization and comparison is presented excellently once the assessor cannot read your essay you will sure have a poor mark.