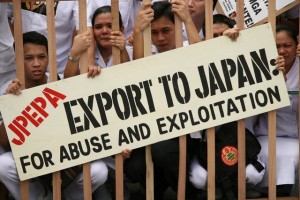 MANILA, Philippines – Members of the Catholic Bishops Conference of the Philippines on Friday lamented the ratification of the Japan-Philippines Economic Partnership Agreement (Jpepa), saying that it would legalize the abuses committed against Filipino workers.

Caloocan Bishop Deogracias Iniguez, chairman of the CBCP committee on public affairs, said that there was a problem with the nation’s leaders after noting that Jpepa was ratified despite strong opposition.

“There are a lot of provisions na masyado kawawa ang Filipinos like the sovereignty, yung pwede sila magtayo ng product nila and the opening of their market to health care workers which is napakahirap ng conditions para mag-qualify mga workers natin,” the Caloocan prelate lamented.

Read the rest of this entry>