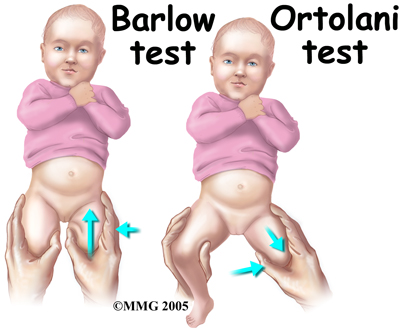 Assessment and examination in newborns is vital to detect congenital hip dysplasia. Early detection promotes timely intervention to any abnormality noted in infants. Nurses should have extensive knowledge on these assessment tests to start an early treatment just as early as the condition was suspected.

Ortolani test or Ortolani Maneuver is a physical examination for congenital hip dysplasia or developmental hip dysplasia. The test was named after Marino Ortolani, the person who developed it in 1937. The maneuver is performed by abducting the infant’s hip an assessing for a clicking sound.

This test is used to detect the posterior dislocation of the hip. A positive Ortolani’s sign is noted when a clicking or distinctive “clunk” is heard when femoral head re-enters the acetabulum.

Ortolani maneuver is performed before 2-3 months of age. The maneuver is done in early infancy because after 2-3 months the development of soft tissue contracture prevents the hip from being relocated, thus, no clicking or clunking sound will be assessed in children with congenital hip dysplasia.

Barlow test is a maneuver performed by bringing the thigh towards the midline of the body. Feeling of femoral head slipping out of the socket postolaterally, is considered as a positive Barlow’s sign.

The Ortolani test is then used to confirm that the hip is actually dislocated.