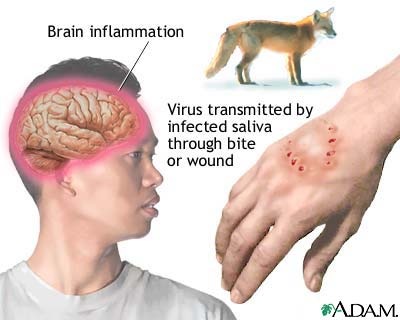 Rabies (from Latin: rabies, “madness, rage, fury.” Also known as “hydrophobia”) is a viral zoonotic neuroinvasive disease that causes acute encephalitis (inflammation of the brain) in mammals. It is most commonly caused by a bite from an infected animal, but occasionally by other forms of contact. If left untreated in humans it is almost invariably fatal. In some countries it is a significant killer of livestock.

The rabies virus makes its way to the brain by following the peripheral nerves. The incubation period of the disease depends on how far the virus must travel to reach the central nervous system, usually taking a few months.

In the beginning stages of rabies, the symptoms are malaise, headache, and fever, while in later stages it includes acute pain, violent movements, uncontrolled excitements, depressions, and the inability to swallow water (hence the name hydrophobia). In the final stages, the patient begins to have periods of mania and lethargy, and coma. Death generally occurs due to respiratory insufficiency.

In non-vaccinated humans, rabies is almost invariably fatal after neurological symptoms have developed, but prompt post-exposure vaccination may prevent the virus from progressing. There are only six known cases of a person surviving symptomatic rabies, and only two known cases of survival in which the patient received no rabies-specific treatment either before or after illness onset.

1. It is a bullet-shaped filterable virus with strong affinity to the CNS.

2. It is sensitive to sunlight, ultraviolet light, ether, formalin, mercury, and nitric acid. The organism is resistant to phenol, merthiolate, and common antibacterial agents. 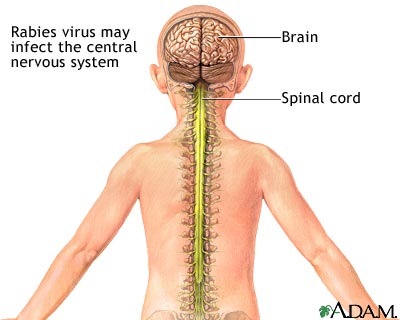 1. One week to seven and a half months in dogs.

a. Distance of the bite to the brain

b. Extensiveness of the bite

c. Specie of the animal

d. Richness of the nerve supply in the area of the

e. Resistance of the host

The patient is communicable from three to five days before onset of symptoms until the entire course of illness.

1. From the site of the bite, the organism proceeds to the CNS through the exoplasm of the peripheral nerves.

2. Experimental studies have shown that the virus stays for sometimes in the inoculation site, and the multiplication of the virus occurs in the myocytes.

3. It has been observe that the period between inoculation and nerve invasion is the only time when prophylactic vaccine is effective.

4. Once the virus infects the individual, the spread is both centripetal and centrifugal.

5. After infection of the CNS, the virus spreads though the peripheral nerves, to the salivary glands, and also to other organs such as the lungs, the adrenals, the kidneys, the bladder, and the testicles (priapism).

2. This consists of neural necrosis and mononuclear cellular infiltration specially in the thalamus, hypothalamus, pons, and medulla.

4. Neural changes are present in the spinal cord especially in the posterior horns.

5. Negri bodies are most abundant in the hypocampus, basal ganglia, pons, and medulla, and are found in the degenerating neurons of the salivary glands (pathologic sign for rabies).

b. There is pain at the original site of the bite. Headache and nausea may be present.

c. The patient becomes sensitive to light, sound and temperature.

d. There are pain and aches in different parts of the body.

e. Anesthesia, numbness, tingling, burning, and cold sensation maybe felt along the peripheral nerves involved and the site of the bite.

a. This phase is characterized by marked excitation, and apprehension. Terror may even occur.

b. There is delirium associated with nuchal rigidity, involuntary twitching or generalized convulsions.

c. The patient may exhibit maniacal behavior, eyes are fixed and glossy, and the skin is cold and clammy.

d. There is a severe and painful spasm of the muscles of the mouth, pharynx, and larynx, on attempt to swallow water or food or even at the mere sight of them.

e. There is aerophobia or intense fear or dislike of flying.

f. There is profuse drooling of saliva.

g. There is tonic or clonic contraction of the muscles.

h. Death may occur during the episode of spasm or from cardiac/respiratory failure.

i. If patient survives during this phase, patient deteriorates rapidly and enters to the terminal phase.

a. The patient becomes quiet and unconscious.

b. There is loss of bowel and urinary control.

d. There is tachycardia, labored, or irregular respiration.

1. Virus isolation from the patient’s saliva or throat.

3. Presence of negri bodies in the dog’s brain.

1. Thoroughly wash the wounds from the bite and scratches of dog with soap and running water for at least three minutes.

2. Check the patient’s immunization status. Give tetanus toxoid if needed.

3. Give tetanus antiserum infiltrated around the wound-or given intramuscularly after a negative skin test.

4. Give anti-rabies vaccine, both passive and active, depending upon the site and extensiveness of the bite as well as the health condition of the biting animal.

2. Give emotional and spiritual support.

4. Darken the room and provide a quiet environment.

5. Patient should not be bathed and there should not be any running water in the room or within the hearing distance of the patient.

6. If IV fluid has to be given it should be wrapped and needle should be securely anchored in the vein to avoid dislodging in times of restlessness.

7. Concurrent and terminal disinfection should be carried out.

The eradication of rabies should be on global scale and should include measures to prevent and control the disease in animals and wildlife.

1. Vaccination of all dogs

2. Enforcement of regulations for pickup and destruction of stray dogs

3. Confinement of any dog that has bitten a person for ten to fourteen days

4. Availability of laboratory facilities for observation and diagnosis

5. Providing public education, especially among children, in avoiding and reporting all animals that appear sick.

Treatment after exposure, known as post-exposure prophylaxis or “P.E.P.”, is highly successful in preventing the disease if administered promptly, generally within six days of infection. Thoroughly washing the wound as soon as possible with soap and water for approximately five minutes is very effective at reducing the number of viral particles. “If available, a virucidal antiseptic such as povidone-iodine, iodine tincture, aqueous iodine solution or alcohol (ethanol) should be applied after washing.” Exposed mucous membranes such as eyes, nose or mouth should be flushed well with water. In the United States, patients receive one dose of immunoglobulin and five doses of rabies vaccine over a twenty-eight day period. One-half the dose of immunoglobulin is injected in the region of the bite, if possible, with the remainder injected intramuscularly away from the bite. This is much less painful compared with administering immunoglobulin through the abdominal wall with a large needle, as was done in the past. The first dose of rabies vaccine is given as soon as possible after exposure, with additional doses on days three, seven, fourteen, and twenty-eight after the first. Patients that have previously received pre-exposure vaccination do not receive the immunoglobulin, only the post-exposure vaccinations on day 0 and 3. Since the widespread vaccination of domestic dogs and cats and the development of effective human vaccines and immunoglobulin treatments, the number of recorded deaths in the U.S. from rabies has dropped from one hundred or more annually in the early twentieth century, to 1–2 per year, mostly caused by bat bites, which may go unnoticed by the victim and hence untreated.

P.E.P. is effective in treating rabies because the virus must travel from the site of infection through the peripheral nervous system (nerves in the body) before infecting the central nervous system (brain and spinal cord) and glands to cause lethal damage. This travel along the nerves is usually slow enough that vaccine and immunoglobulin can be administered to protect the brain and glands from infection. The amount of time this travel requires is dependent on how far the infected area is from the brain: if the victim is bitten in the face, for example, the time between initial infection and infection of the brain is very short and P.E.P. may not be successful.

Currently pre-exposure immunization has been used on domesticated and normal non-human populations. In many jurisdictions, domestic dogs, cats, and ferrets are required to be vaccinated. A pre-exposure vaccination is also available for humans, most commonly given to veterinarians and those traveling to regions where the disease is common, such as India. Most tourists do not need such a vaccination, just those doing substantial non-urban activities. However, should a vaccinated human be bitten by a carrier, failure to receive subsequent post-exposure treatment could be fatal, although post-exposure treatment for a vaccinated human is far less extensive than that which would normally be required by one with no pre-exposure vaccination.

In 1984 researchers at the Wistar Institute developed a recombinant vaccine called V-RG by inserting the glycoprotein gene from rabies into a vaccinia virus. The V-RG vaccine has since been commercialised by Merial under the trademark Raboral. It is harmless to humans and has been shown to be safe for various species of animals that might accidentally encounter it in the wild, including birds (gulls, hawks, and owls).

V-RG has been successfully used in the field in Belgium, France, and the United States to prevent outbreaks of rabies in wildlife. The vaccine is stable under relatively high temperatures and can be delivered orally, making mass vaccination of wildlife possible by putting it in baits. The plan for immunization of normal populations involves dropping bait containing food wrapped around a small dose of the live virus. The bait would be dropped by helicopter concentrating on areas that have not been infected yet. Just such a strategy of oral immunization of foxes in Europe has already achieved substantial reductions in the incidence of human rabies. A strategy of vaccinating “neighborhood dogs” in Jaipur, India, (combined with a sterilization program) has also resulted in a large reduction in the number of human cases.