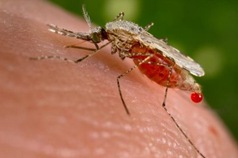 Malaria is an acute and chronic parasitic disease transmitted by the bite of infected mosquitoes and it is confined mainly to tropical and subtropical areas.

This disease causes more disability and heavier economic burden than any parasitic disease.

Countries where malaria is endemic as of 2003 Malaria generally occurs in areas where environmental conditions allow parasite multiplication in the vector. Thus, malaria is usually restricted to tropical and subtropical areas (see map) and altitudes below 1,500 m. However, this distribution might be affected by climatic changes, especially global warming, and population movements. Both Plasmodium falciparum and P. malariae are encountered in all shaded areas of the map (with P. falciparum by far the most prevalent). Plasmodium vivax and P. ovale are traditionally thought to occupy complementary niches, with P. ovale predominating in Sub-Saharan Africa and P. vivax in the other areas; however these two species are not always distinguishable on the basis of morphologic characteristics alone; the use of molecular tools will help clarify their exact distribution.

1. The disease is caused by four species of protozoa:

· This is considered as the most serious malarial infection because of the development of high parasitic densities in blood (RBC) with tendency to agglutinate and form into microemboli.

· This is most common in the Philippines.

· This is nonlife threatening except for the very young and the old.

· It is manifested by chills every 48 hours on the 3rd day onward especially if untreated.

· It is less frequently seen.

· This specie is nonlife threatening.

· Fever and chills usually occur every 72 hours usually on the 4th day after onset.

d. Plasmodium ovale is the rare type of protozoan species.

· This is rarely seen in the Philippines.

2. The primary vector of malaria is the female Anopheles mosquito which has the following characteristics:

a. It breeds in clear, flowing, and shaded streams usually in the mountains.

b. It is bigger in size than the ordinary mosquito.

c. It is brown in color.

d. It is a night-biting mosquito.

e. It usually does not bite a person in motion.

f. It assumes a 36º position when it alights on walls, trees, curtains, and the like.

Untreated or insufficiently treated patient may be the source of mosquito infection for more than three years in P. malariae, one to two years in P. vivax, and not more than one year on P. falciparum. 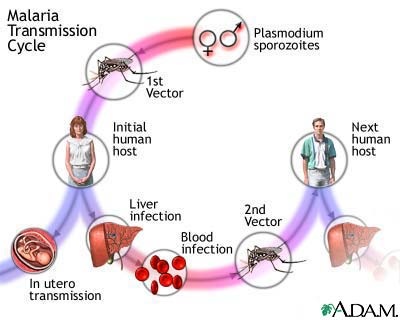 1. The patient must be closely monitored.

a. Intake and output should be closely monitored to prevent pulmonary edema.

2. If the patient exhibits respiratory and renal symptoms, determine the arterial blood gas and plasma electrolyte

3. During the febrile stage, tepid sponges, alcohol rubs, and ice cap on the head will help bring the temperature down.

4. Application of external heat and offering hot drinks during chilling stage is helpful.

6. Encourage the patient to take plenty of fluids.

7. As the temperature falls and sweating begins, warm sponge bath maybe given.

8. The bed and clothing should be kept dry.

10. Evaluate the degree of anemia.