Erythema infectiosum or the “Fifth Disease” is an infectious disorder that affects children aging 2-12 years of age. The term “fifth disease” was based on the classification system for childhood rashes decades ago. Generally, the five frequent childhood rashes are the following:

Because erythema infectiosum is the fifth disease that causes rashes in children, thus, the term has been used by most people. The prevalence of the illness is more commonly seen during spring and winter period and studies show that females are often affected than males.

Parvovirus B19, sometimes called as erythrovirus B19 is a part of the genus Parvoviridae. It was accidentally detected in 1975 by an Australianvirologist Yvonne Cossart. 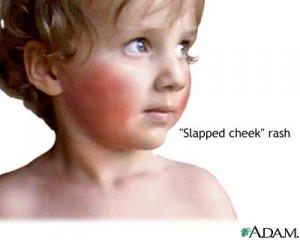 Fifth disease produces symptoms that are benign and go away on their own. The following are most likely observed: 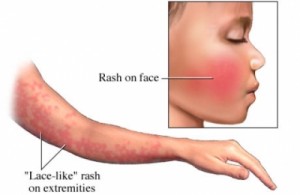 Rashes are expected to scatter on the extremities (extensor surface) a day after the facial rash develops.

Flexor surfaces of extremities and trunk

Rash invasion in these areas are observed a day after it appeared on the extensor surfaces (inner arm and leg).