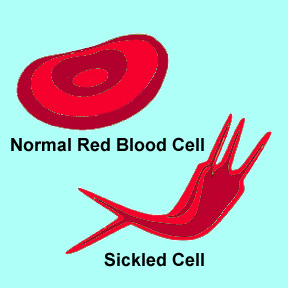 Sickle cell anemia is an inherited disorder on the beta chain of the hemoglobin resulting to abnormally shaped red blood cells. RBC’s assume a crescent or C-shape that decreases the cell’s life span and ability to function thereby, producing various complications. In some cases, these sickled cells may block the flow causing pain and organ damage. 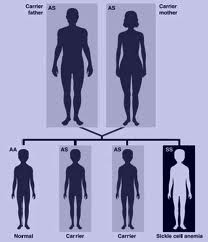 Review of Related Anatomy and Physiology

Red blood cells or erythrocytes carry oxygen to the different parts of the body. Different from other cells, RBC’s do not contain a nucleus (anucleated). These small cells are circular and flattened with depressed centers on both sides resembling to that of a doughnut when viewed under a microscope. Their size and shape provides a large surface area for carrying oxygen in relation to their volume. The normal RBC count is 4-6 million/mm3. RBC’s has the life span of 120 days.

Hemoglobin is a form of protein that contains iron which is responsible for transporting oxygen that is carried in blood. Adult hemoglobin contains a beta chain (HBB) while a fetus’ hemoglobin has a gamma chain. Hemoglobin is comprised of four protein (amino acid) components. It has two beta-globin and two alpha-globin. The subunit beta-globin is located inside the RBCs. These amino acids carry an iron-bearing molecule called heme. Heme molecules, which are only found in mature RBC’s, enables the erythrocytes to pick oxygen from the lungs and transport it throughout the body. Once oxygen attaches to hemoglobin it gives the blood its bright red pigment.

The more hemoglobin molecules the RBC contain, a higher amount of oxygen will they be able to carry. If the hemoglobin is defective, the erythrocyte will also malfunction. A red blood cell is just a vessel; the one that performs the oxygen transportation is the hemoglobin. Normal hemoglobin is 13-18 grams/100 ml of blood in males and 12-16 grams in females.

Erythrocytes in sickle cell anemia contain abnormal hemoglobin that affects the beta-chain producing hemoglobin S or HbS. In this disorder, the beta-chains (beta-globins) are replaced by Hemoglobin S. Valine (an amino acid) takes the place of the normally appearing glutamic acid in beta-chains. Replacement of glutamic acid with valine causes the polymerization of HbS components to cohere forming long and insoluble particles. These distort the red blood cells, which assumes an inflexible crescent or sickle shape.

The abnormally shaped cells become sharp and spiky when the RBCs are discharging oxygen molecules and in cases where the oxygen content in blood is low such as performing vigorous exercise and being in high altitude areas. Typically, a sickled cell’s lifespan is only 20 days. The deformed erythrocytes also rupture easily and they tend to be trapped in the microcirculation, obstructing blood flow and oxygen transport that might lead to painful episodes of ischemic injury.

Sickle cell crisis refers to episodes of acute and severe sickling that blocks the circulation posing a threat of extensive organ damage. Severe pain is noted during these incidents caused by occluded vessels in the bone possibly resulting to bone necrosis. The crisis is triggered by hypoxemia, acidosis, or other conditions such as dehydration, infection, vigorous exercise, pregnancy or cold weather.

The following manifestations are observed in children with a sickle cell disorder, at about 6 months of age (because fetal hemoglobin contains gamma, not a beta chain):

If the patient does not respond to the usual therapies STEM CELL TRANSPLANTATION is done.