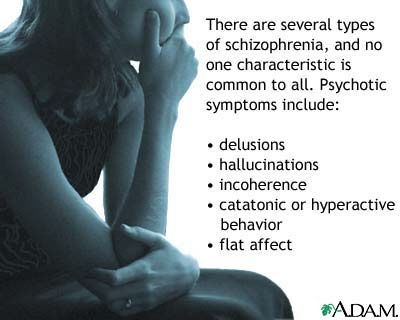 Schizophrenia is an extremely complex mental disorder: in fact it is probably many illnesses masquerading as one. A biochemical imbalance in the brain is believed to cause symptoms. Recent research reveals that schizophrenia may be a result of faulty neuronal development in the fetal brain, which develops into full-blown illness in late adolescence or early adulthood.

Schizophrenia causes distorted and bizarre thoughts, perceptions, emotions, movement, and behavior. It cannot be defined as a single illness; rather thought as a syndrome or disease process with many different varieties and symptoms. It is usually diagnosed in late adolescence or early adulthood. Rarely does it manifest in childhood. The peak incidence of onset is 15 to 25 years of age for men and 25 to 35 years of age for women.

The diagnosis is made according to the client’s predominant symptoms:

Structure and function of the nervous system

1. The CNS is composed of the brain and spinal cord.

B. The brain is covered by three membranes. 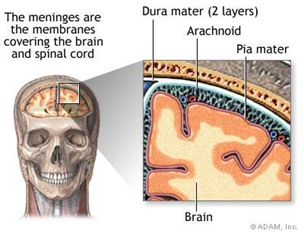 2. The arachnoid membrane is a delicate serous membrane.

3. The pia matter is a vascular membrane.

C. The spinal cord extends from the medulla oblongata to the lower border of the first lumbar vertebrae. It contains millions of nerve fibers, and it consists of 31 nerves – 8 cervical, 12 thoracic, 5 lumbar, and 5 sacral.

D. Cerebrospinal fluid (CSF) forms in the lateral ventricles in the choroid plexus of the pia matter. It flows through the foramen of Monro into to the third ventricle, then through the aqueduct of Sylvius to the fourth ventricle. CSF exits the fourth ventricle by the foramen of Magendie and the two foramens of Luska. It then flows into the cistema magna, and finally it circulates to the subarachnoid space of the spinal cord, bathing both the brain and the spinal cord. Fluid is absorbed by the arachnoid membrane. 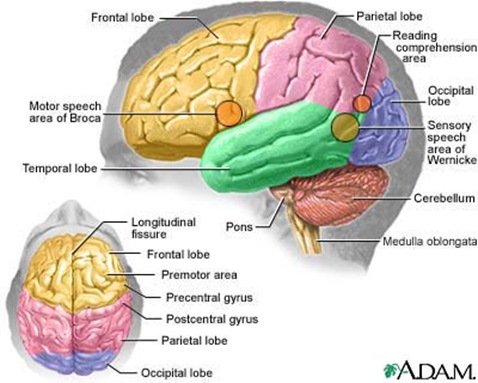 a The cerebrum is the center for consciousness, thought, memory, sensory input, and motor activity; it consists of two hemispheres (left and right) and four lobes, each with specific functions.

i The frontal lobe controls voluntary muscle movements and contains motor areas, including the area for speech; it also contains the centers for personality, behavioral, autonomic and intellectual functions and those for emotional and cardiac responses.

ii The temporal lobe is the center for taste, hearing and smell, and in the brain’s dominant hemisphere, the center for interpreting spoken language. 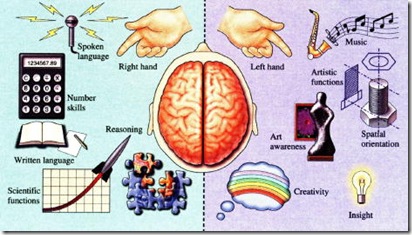 iii The parietal lobe coordinates and interprets sensory information from the opposite side of the body.

b The thalamus further organizes cerebral function by transmitting impulses to and from the cerebrum. It also is responsible for primitive emotional responses, such as fear, and for distinguishing between pleasant and unpleasant stimuli. 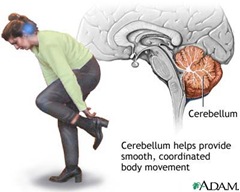 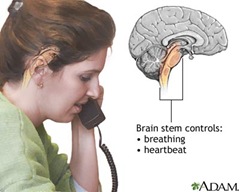 e The brain stem, which includes the mesencephalon, pons, and medulla oblongata, relays nerve impulses between the brain and spinal cord.

2. The spinal cord forms a two-way conductor pathway between the brain stem and the PNS. It is also the reflex center for motor activities that do not involve brain control.

B. The PNS connects the CNS to remote body regions and conducts signals to and from these areas and the spinal cord.

C. The ANS regulates body functions such as digestion, respiration, and cardiovascular function. Supervised chiefly by the hypothalamus, the ANS contains two divisions.

2. The parasympathetic nervous system is the dominant controller for most visceral effectors for most of the time. Parasympathetic impulses are mediated by acetylcholine.

A. Accuracy and completeness of the neurologic assessment is limited by the child’s development.

B. The child’s brain constantly undergoes organization in function and myelinization. Therefore, the full impact of insult may not be immediately apparent and may take years to manifest.

C. The peripheral nerves are not fully myelinated at birth. As myelinization progresses, so does the child’s fine motor control and coordination.

D. Early signs of increased intracranial pressure (ICP) may not be apparent in infants because open sutures and fontanelles compensate to a limited extent.

E. The development of handedness before 1 year of age may signify a neurologic lesion.

F. Several primitive reflexes are present at birth, disappearing by 1 year of age. Absence, persistence, or asymmetry of reflexes may indicate pathology.

G. The spinal cord ends at 13 in the neonate, instead of L1-L2 where it terminates in the adult. This affects the site of lumbar puncture.

Currently, there is no method for preventing schizophrenia and there is no cure. Minimizing the impact of disease depends mainly on early diagnosis and, appropriate pharmacological and psycho-social treatments. Hospitalization may be required to stabilize ill persons during an acute episode. The need for hospitalization will depend on the severity of the episode. Mild or moderate episodes may be appropriately addressed by intense outpatient treatment. A person with schizophrenia should leave the hospital or outpatient facility with a treatment plan that will minimize symptoms and maximize quality of life.

A comprehensive treatment program can include:

Medication is one of the cornerstones of treatment. Once the acute stage of a psychotic episode has passed, most people with schizophrenia will need to take medicine indefinitely. This is because vulnerability to psychosis doesn’t go away, even though some or all of the symptoms do. In North America, atypical or second generation antipsychotic medications are the most widely used. However, there are many first-generation antipsychotic medications available that may still be prescribed. A doctor will prescribe the medication that is the most effective for the ill individual

Another important part of treatment is psychosocial programs and initiatives. Combined with medication, they can help ill individuals effectively manage their disorder. Talking with your treatment team will ensure you are aware of all available programs and medications.

In addition, persons living with schizophrenia may have access to or qualify for income support programs/initiatives, supportive housing, and/or skills development programs, designed to promote integration and recovery.