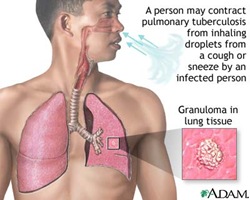 Pulmonary tuberculosis is an infectious disease caused by slow- growing bacteria that resembles a fungus, Myobacterium tuberculosis, which is usually spread from person to person by droplet nuclei through the air. The lung is the usual infection site but the disease can occur elsewhere in the body. Typically, the bacteria from lesion (tubercle) in the alveoli. The lesion may heal, leaving scar tissue; may continue as an active granuloma, heal, then reactivate or may progress to necrosis, liquefaction, sloughing, and cavitation of lung tissue. The initial lesion may disseminate bacteria directly to adjacent tissue, through the blood stream, the lymphatic system, or the bronchi.

Most people who become infected do not develop clinical illness because the body’s immune system brings the infection under control. However, the incidence of tuberculosis (especially drug resistant varieties) is rising. Alcoholics, the homeless and patients infected with the human immunodeficiency virus (HIV) are especially at risk. Complications of tuberculosis include pneumonia, pleural effusion, and extrapulmonary disease.

Respiration is defined in two ways. In common usage, respiration refers to the act of breathing, or inhaling and exhaling. Biologically speaking, respiration strictly means the uptake of oxygen by an organism, its use in the tissues, and the release of carbon dioxide. By either definition, respiration has two main functions: to supply the cells of the body with the oxygen needed for metabolism and to remove carbon dioxide formed as a waste product from metabolism. This lesson describes the components of the upper respiratory tract.

The nasal cavity, the mouth, the pharynx, the epiglottis, the larynx, and the upper trachea. The oesophagus leads to the digestive tract.

One of the features of both the upper and lower respiratory tracts is the mucociliary apparatus that protects the airways from irritating substances, and is composed of the ciliated cells and mucus-producing glands in the nasal epithelium. The glands produce a layer of mucus that traps unwanted particles as they are inhaled. These are swept toward the posterior pharynx, from where they are either swallowed, spat out, sneezed, or blown out.

Air passes through each of the structures of the upper respiratory tract on its way to the lower respiratory tract. When a person at rest inhales, air enters via the nose and mouth. The nasal cavity filters, warms, and humidifies air. The pharynx or throat is a tube like structure that connects the back of the nasal cavity and mouth to the larynx, a passageway for air, and the esophagus, a passageway for food. The pharynx serves as a common hallway for the respiratory and digestive tracts, allowing both air and food to pass through before entering the appropriate passageways.

The pharynx contains a specialised flap-like structure called the epiglottis that lowers over the larynx to prevent the inhalation of food and liquid into the lower respiratory tract.

The larynx, or voice box, is a unique structure that contains the vocal cords, which are essential for human speech. Small and triangular in shape, the larynx extends from the epiglottis to the trachea. The larynx helps control movement of the epiglottis. In addition, the larynx has specialised muscular folds that close it off and also prevent food, foreign objects, and secretions such as saliva from entering the lower respiratory tract.