Pneumonia is an inflammation of the lungs caused by an infection. It is also called Pneumonitis or Bronchopneumonia. Pneumonia can be a serious threat to our health. Although pneumonia is a special concern for older adults and those with chronic illnesses, it can also strike young, healthy people as well.  It is a common illness that affects thousands of people each year in the Philippines, thus, it remains an important cause of morbidity and mortality in the country.
There are many kinds of pneumonia that range in seriousness from mild to life-threatening. In infectious pneumonia, bacteria, viruses, fungi or other organisms attack your lungs, leading to inflammation that makes it hard to breathe. Pneumonia can affect one or both lungs. In the young and healthy, early treatment with antibiotics can cure bacterial pneumonia. The drugs used to fight pneumonia are determined by the germ causing the pneumonia and the judgment of the doctor. It’s best to do everything we can to prevent pneumonia, but if one do get sick, recognizing and treating the disease early offers the best chance for a full recovery.
A case with a diagnosis of Pneumonia may catch one’s attention, though the disease is just like an ordinary cough and fever, it can lead to death especially when no intervention or care is done. Since the case is a toddler, an appropriate care has to be done to make the patient’s recovery faster. Treating patients with pneumonia is necessary to prevent its spread to others and make them as another victim of this illness.

The lungs constitute the largest organ in the respiratory system. They play an important role in respiration, or the process of providing the body with oxygen and releasing carbon dioxide. The lungs expand and contract up to 20 times per minute taking in and disposing of those gases.
Air that is breathed in is filled with oxygen and goes to the trachea, which branches off into one of two bronchi. Each bronchus enters a lung. There are two lungs, one on each side of the breastbone and protected by the ribs. Each lung is made up of lobes, or sections. There are three lobes in the right lung and two lobes in the left one. The lungs are cone shaped and made of elastic, spongy tissue. Within the lungs, the bronchi branch out into minute pathways that go through the lung tissue. The pathways are called bronchioles, and they end at microscopic air sacs called alveoli. The alveoli are surrounded by capillaries and provide oxygen for the blood in these vessels. The oxygenated blood is then pumped by the heart throughout the body. The alveoli also take in carbon dioxide, which is then exhaled from the body.
Inhaling is due to contractions of the diaphragm and of muscles between the ribs. Exhaling results from relaxation of those muscles. Each lung is surrounded by a two-layered membrane, or the pleura, that under normal circumstances has a very, very small amount of fluid between the layers. The fluid allows the membranes to easily slide over each other during breathing.

Pneumonia is a serious infection or inflammation of your lungs. The air sacs in the lungs fill with pus and other liquid. Oxygen has trouble reaching your blood. If there is too little oxygen in your blood, your body cells can’t work properly. Because of this and spreading infection through the body pneumonia can cause death. Pneumonia affects your lungs in two ways. Lobar pneumonia affects a section (lobe) of a lung. Bronchial pneumonia (or bronchopneumonia) affects patches throughout both lungs.

Bacteria are the most common cause of pneumonia. Of these, Streptococcus pneumoniae is the most common. Other pathogens include anaerobic bacteria, Staphylococcus aureus, Haemophilus influenzae, Chlamydia pneumoniae, C. psittaci, C. trachomatis, Moraxella (Branhamella) catarrhalis, Legionella pneumophila, Klebsiella pneumoniae, and other gram-negative bacilli. Major pulmonary pathogens in infants and children are viruses: respiratory syncytial virus, parainfluenza virus, and influenza A and B viruses. Among other agents are higher bacteria including Nocardia and Actinomyces sp; mycobacteria, including Mycobacterium tuberculosis and atypical strains; fungi, including Histoplasma capsulatum, Coccidioides immitis, Blastomyces dermatitidis, Cryptococcus neoformans, Aspergillus fumigatus, and Pneumocystis carinii; and rickettsiae, primarily Coxiella burnetii (Q fever).

Typical symptoms include cough, fever, and sputum production, usually developing over days and sometimes accompanied by pleurisy. Physical examination may detect tachypnea and signs of consolidation, such as crackles with bronchial breath sounds. This syndrome is commonly caused by bacteria, such as S. pneumoniae and H. influenzae.

·  Sleeping mostly at night and during afternoon

·  Usually wakes up early in the morning (5AM) to be milkfed.

·  Eats a lot (hotdogs, chicken, crackers, any food given to her)

· Urinates in her diaper (more than 4 times a day)

· Likes to play with those around her 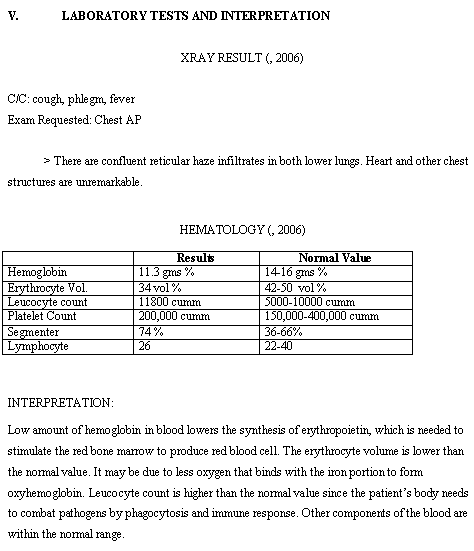 Admit patient to ROC under the service of Dr. Vitan secure consent for  admission and management, TPR every shift then record. May have diet for age with strict aspiration precaution, IVF D5 0.3NaCl 500cc to run at 62-63mgtts/min.May give paracetamol 125mg 1supp/rectum if oral paracetamol is not tolerated.