Leukemias are cancers of the blood-forming tissues. White blood cells may be produced in excessive amounts and are unable to work properly which weakens the immune system.

Blood cells are formed in the bone marrow, the soft, spongy center of bones. New (immature) blood cells are called blasts. Some blasts stay in the marrow to mature. Some travel to other parts of the body to mature.

In both men and women, leukemia incidence is highest among whites and lowest among Chinese, Japanese, and Koreans. The incidence in men is about 50% higher than in women for all racial/ethnic groups except Vietnamese, among whom the male rates are only slightly higher. Ethnic differences in the incidence rates are small in the youngest adult age group (30-54 years), but become more evident in each of the older age groups. It is found that childhood leukemia rates are highest among Filipinos, followed by white Hispanics, non-Hispanic whites and blacks. 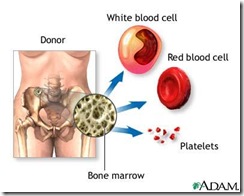 Blood is one of the connective tissues. As a connective tissue, it consists of cells and cell fragments (formed elements) suspended in an intercellular matrix (plasma). Blood is the only liquid tissue in the body that measures about 5 liters in the adult human and accounts for 8 percent of the body weight.

The body consists of metabolically active cells that need a continuous supply of nutrients and oxygen. Metabolic waste products need to be removed from the cells to maintain a stable cellular environment. Blood is the primary transport medium that is responsible for meeting these cellular demands.

Blood cells are formed in the bone marrow, the soft, spongy center of bones. New (immature) blood cells are called blasts. Some blasts stay in the marrow to mature. Some travel to other parts of the body to mature.

The activities of the blood may be categorized as transportation, regulation, and protection.

These functional categories overlap and interact as the blood carries out its role in providing suitable conditions for celluar functions.

The transport functions include:

The regulation functions include:

The protection functions include: 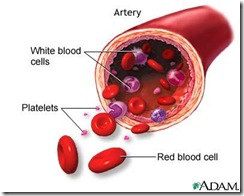 When a sample of blood is spun in a centrifuge, the cells and cell fragments are separated from the liquid intercellular matrix. Because the formed elements are heavier than the liquid matrix, they are packed in the bottom of the tube by the centrifugal force. The light yellow colored liquid on the top is the plasma, which accounts for about 55 percent of the blood volume and red blood cells is called the hematocrit,or packed cell volume (PCV). The white blood cells and platelets form a thin white layer, called the “buffy coat,” between plasma and red blood cells.

The watery fluid portion of blood (90 percent water) in which the corpuscular elements are suspended. It transports nutrients as well as wastes throughout the body. Various compounds, including proteins, electrolytes, carbohydrates, minerals, and fats, are dissolved in it.

Erythrocytes, or red blood cells, are the most numerous of the formed elements. Erythrocytes are tiny biconcave disks, thin in the middle and thicker around the periphery. The shape provides a combination of flexibility for moving through tiny capillaries with a maximum surface area for the diffusion of gases. The primary function of erythrocytes is to transport oxygen and, to a lesser extent, carbon dioxide.

Leukocytes or white blood cells are generally larger than erythrocytes, but they are fewer in number. Even though they are considered to be blood cells, leukocytes do most of their work in the tissues. They use the blood as a transport medium. Some are phagocytic, others produce antibodies, some secrete histamine and, heparin, and others neutralize histamine. Leukocytes are able to move through the capillary walls into the tissue spaces, a process called diapedesis.In the tissue spaces they provide a defense against organisms that cause disease and either promote or inhibit inflammatory responses.

Neutrophils, the most numerous leukocytes, are phagocytic and have light-colored granules. Eosinophils have granules and help counteract the effects of histamine. Basophils secrete histomine and heparin and have blue granules. In the tissues, they are called mastcells. Lymphocytes are agranulocytes that have a special role in immune processes. Some attack bacteria directly; others produce antibodies.

Thrombocytes, or platelets, are not complete cells, but are small fragments of very large cells called megakaryocytes. Megakaryocytes develop from hemocytoblasts in the red bone marrow. Thrombocytes become sticky and clump together to form platelet plugs that close breaks and tears in blood vessels. They also initiate the formation of blood clots. 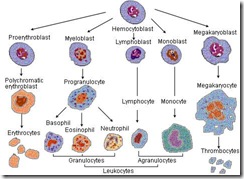 All types of formed elements develop from a single cell type – stem cell (pleuripotential cells or hemocytoblasts). Seven different cell lines, each controlled by a specific growth factor, develop from the hemocytoblast. When a stem cell divides, one of the “daughters” remains a stem cell and the other becomes a precursor cell, either a lymphoid cell or a myeloid cell. These cells continue to mature into various blood cells.

A leukemia can develop at any point in cell differentiation. The illustration below shows the development of the formed elements of the blood.

Blood-related cancers, or leukemias, have been shown to arise from a rare subset of cells that escape normal regulation and drive the formation and growth of the tumor. The finding that these so-called cancer stem cells, or leukemic stem cells (LSC), can be purified away from the other cells in the tumor allows their precise analysis to identify candidate molecules and regulatory pathways that play a role in progression, maintenance, and spreading of leukemias. The analyses of the other, numerically dominant, cells in the tumor, while also interesting, do not directly interrogate these key properties of malignancies. Mouse models of human myeloproliferative disorder and acute myelogenous leukemia have highlighted the remarkable conservation of disease mechanisms between both species. They can now be used to identify the LSC for each type of human leukemia and understand how they escape normal regulation and become malignant. Given the clinical importance of LSC identification, the insights gained through these approaches will quickly translate into clinical applications and lead to improved treatments for human leukemias.

The exact cause of leukemia is unknown, although many genetic and environmental factors are involved in its development. The basic mechanism involves damage to genes controlling cell growth. This damage then changes cells from a normal to a malignant (cancer) state. Analysis of bone marrow of a client with acute leukemias shows abnormal chromosomes about 50% of the time. Possible risk factors for the development of leukemia include ionizing radiation, exposure to chemicals and drugs, bone marrow hypoplasia (reduced production of blood cells), genetic factors, immunologic factors, environmental factors, and the interaction of theses factors.

Certain chemicals and drugs have been linked to the development of leukemia because of their ability to damage DNA. Previous treatment for cancer that included melphaplan, cyclosphamide, doxorubicin, and etoposide poses risks for leukemia development about 5 to 8 years after treatment.

Genetic factors influence leukemia development. There is an increased incidence of the disease among clients with hereditary conditions such as Down syndrome, blooms syndrome, Klinefelter syndrome, and Fanconi’s anemia. Identical sibling’s of client with leukemia have a higher rate of leukemia than does general population.

Immunologic factors, especially immune deficiencies, may promote the development of leukemia. Leukemia among immunodeficient people may be a result of immune surveilance failure, or the same mechanisms that cause the immune deficiency may also trigger cancer in the white blood cells population.

Interaction of many host and environmental factors may result in leukemia. Because each person tolerates the interaction of these factors differently, it is difficult to determine the origin of any specific leukemia. 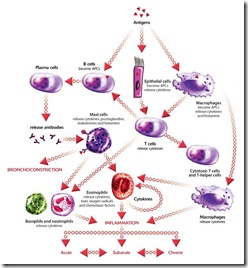 Leukemia is a type of cancer with uncontrolled production of immature white blood cells (usually blast cells) in the bone marrow. As a result, the bone marrow becomes overcrowded with immature, nonfunctional calls and production of normal blood cell is greatly decreased. Leukemia may be acute, with sudden onset ans short duration, or chronic with a slow onset and symptoms that persist for a period of years.

Leukemias are classified by cell type. Abnormal leukemic cells coming from lymphoid pathways are lymphocytic or lymphoblastic. Leukemias in which the abnormal cells come from the myeloid pathways are myelocytic or lymphoblastic. Several subtype exist for each of these diseases, which are classified according to the degree of maturity of the abnormal cell and the specific cell type involved.

With leukemia, cancer occurs in the stem cells or early precursor leukocyte cell, causing excessive growth of a specific type of leukocyte. These cells are abnormal and their excessive production in the bone marrow stops normal bone marrow production of red blood cells, platelets, and mature leukocytes. Anemia, thrombocytopenia, and leukopenia result. The number of immature, abnormal white blood cells in the blood is greatly elevated. Leukemic cells can also be found in the spleen, liver, liver nodes and central nervous system. Without treatment, the client dies of infection or hemorrhage. For clients with acute leukemia, theae changes occur rapidly and, without intervention, progress to death. Chronic leukemia may be present for years before changes appear.

Leukemias affects all blood cells, and blood influences the health and function of all organs and systems, thus many body areas and system cells may be affected. The following manifestations occur with the acute luekemias. Some of this findings may also be present in the client with chronic leukemia in the blast phase.

To eradicate leukemic cells and allow restoration of normal hematopoiesis.

Different types of leukemia are best treated with different kinds of medicine.

Supportive treatments during cancer treatment include:

Medication for nausea and vomiting

Nausea and vomiting are common side effects of chemotherapy. These side effects usually are temporary and go away when treatment is stopped. Your doctor will prescribe drugs to help relieve nausea. These may include: