Diabetes mellitus is a condition in which the pancreas no longer produces enough insulin or cells stop responding to the insulin that is produced, so that glucose in the blood cannot be absorbed into the cells of the body. Symptoms include frequent urination, lethargy, excessive thirst, and hunger. The treatment includes changes in diet, oral medications, and in some cases, daily injections of insulin.

The most common form of diabetes is Type II, It is sometimes called age-onset or adult-onset diabetes, and this form of diabetes occurs most often in people who are overweight and who do not exercise. Type II is considered a milder form of diabetes because of its slow onset (sometimes developing over the course of several years) and because it usually can be controlled with diet and oral medication. The consequences of uncontrolled and untreated Type II diabetes, however, are the just as serious as those for Type I. This form is also called noninsulin-dependent diabetes, a term that is somewhat misleading. Many people with Type II diabetes can control the condition with diet and oral medications, however, insulin injections are sometimes necessary if treatment with diet and oral medication is not working.

The causes of diabetes mellitus are unclear, however, there seem to be both hereditary (genetic factors passed on in families) and environmental factors involved. Research has shown that some people who develop diabetes have common genetic markers. In Type I diabetes, the immune system, the body’s defense system against infection, is believed to be triggered by a virus or another microorganism that destroys cells in the pancreas that produce insulin. In Type II diabetes, age, obesity, and family history of diabetes play a role.

In Type II diabetes, the pancreas may produce enough insulin, however, cells have become resistant to the insulin produced and it may not work as effectively. Symptoms of Type II diabetes can begin so gradually that a person may not know that he or she has it. Early signs are lethargy, extreme thirst, and frequent urination. Other symptoms may include sudden weight loss, slow wound healing, urinary tract infections, gum disease, or blurred vision. It is not unusual for Type II diabetes to be detected while a patient is seeing a doctor about another health concern that is actually being caused by the yet undiagnosed diabetes.

Individuals who are at high risk of developing Type II diabetes mellitus include people who:

Diabetes mellitus is a common chronic disease requiring lifelong behavioral and lifestyle changes. It is best managed with a team approach to empower the client to successfully manage the disease. As part of the team the, the nurse plans, organizes, and coordinates care among the various health disciplines involved; provides care and education and promotes the client’s health and well being. Diabetes is a major public health worldwide. Its complications cause many devastating health problems.

Every cell in the human body needs energy in order to function. The body’s primary energy source is glucose, a simple sugar resulting from the digestion of foods containing carbohydrates (sugars and starches). Glucose from the digested food circulates in the blood as a ready energy source for any cells that need it. Insulin is a hormone or chemical produced by cells in the pancreas, an organ located behind the stomach. Insulin bonds to a receptor site on the outside of cell and acts like a key to open a doorway into the cell through which glucose can enter. Some of the glucose can be converted to concentrated energy sources like glycogen or fatty acids and saved for later use. When there is not enough insulin produced or when the doorway no longer recognizes the insulin key, glucose stays in the blood rather entering the cells. 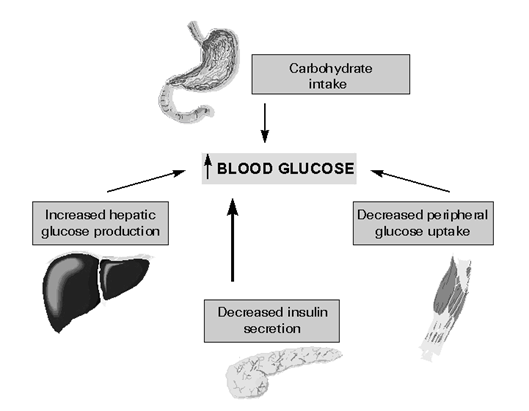 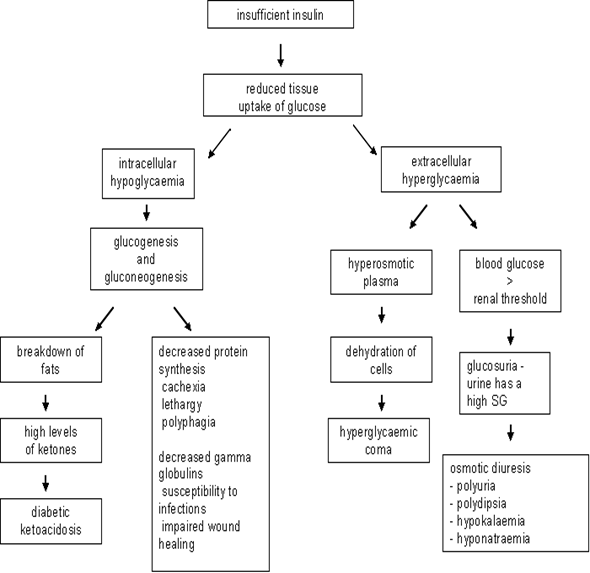 Several blood tests are used to measure blood glucose levels, the primary test for diagnosing diabetes. Additional tests can determine the type of diabetes and its severity.

When diet, exercise and maintaining a healthy weight aren’t enough, you may need the help of medication. Medications used to treat diabetes include insulin. Everyone with type 1 diabetes and some people with type 2 diabetes must take insulin every day to replace what their pancreas is unable to produce. Unfortunately, insulin can’t be taken in pill form because enzymes in your stomach break it down so that it becomes ineffective. For that reason, many people inject themselves with insulin using a syringe or an insulin pen injector,a device that looks like a pen, except the cartridge is filled with insulin. Others may use an insulin pump, which provides a continuous supply of insulin, eliminating the need for daily shots.

A number of drug options exist for treating type 2 diabetes, including:

· Sulfonylurea drugs. These medications stimulate your pancreas to produce and release more insulin. For them to be effective, your pancreas must produce some insulin on its own. Second-generation sulfonylureas such as glipizide (Glucotrol, Glucotrol XL), glyburide (DiaBeta, Glynase PresTab, Micronase) and glimepiride (Amaryl) are prescribed most often. The most common side effect of sulfonylureas is low blood sugar, especially during the first four months of therapy. You’re at much greater risk of low blood sugar if you have impaired liver or kidney function.

· Meglitinides. These medications, such as repaglinide (Prandin), have effects similar to sulfonylureas, but you’re not as likely to develop low blood sugar. Meglitinides work quickly, and the results fade rapidly.

· Biguanides. Metformin (Glucophage, Glucophage XR) is the only drug in this class available in the United States. It works by inhibiting the production and release of glucose from your liver, which means you need less insulin to transport blood sugar into your cells. One advantage of metformin is that is tends to cause less weight gain than do other diabetes medications. Possible side effects include a metallic taste in your mouth, loss of appetite, nausea or vomiting, abdominal bloating, or pain, gas and diarrhea. These effects usually decrease over time and are less likely to occur if you take the medication with food. A rare but serious side effect is lactic acidosis, which results when lactic acid builds up in your body. Symptoms include tiredness, weakness, muscle aches, dizziness and drowsiness. Lactic acidosis is especially likely to occur if you mix this medication with alcohol or have impaired kidney function.

· Alpha-glucosidase inhibitors. These drugs block the action of enzymes in your digestive tract that break down carbohydrates. That means sugar is absorbed into your bloodstream more slowly, which helps prevent the rapid rise in blood sugar that usually occurs right after a meal. Drugs in this class include acarbose (Precose) and miglitol (Glyset). Although safe and effective, alpha-glucosidase inhibitors can cause abdominal bloating, gas and diarrhea. If taken in high doses, they may also cause reversible liver damage.

· Thiazolidinediones. These drugs make your body tissues more sensitive to insulin and keep your liver from overproducing glucose. Side effects of thiazolidinediones, such as rosiglitazone (Avandia) and pioglitazone hydrochloride (Actos), include swelling, weight gain and fatigue. A far more serious potential side effect is liver damage. The thiazolidinedione troglitzeone (Rezulin) was taken off the market in March 2000 because it caused liver failure. If your doctor prescribes these drugs, it’s important to have your liver checked every two months during the first year of therapy. Contact your doctor immediately if you experience any of the signs and symptoms of liver damage, such as nausea and vomiting, abdominal pain, loss of appetite, dark urine, or yellowing of your skin and the whites of your eyes (jaundice). These may not always be related to diabetes medications, but your doctor will need to investigate all possible causes.

· Drug combinations. By combining drugs from different classes, you may be able to control your blood sugar in several different ways. Each class of oral medication can be combined with drugs from any other class. Most doctors prescribe two drugs in combination, although sometimes three drugs may be prescribed. Newer medications, such as Glucovance, which contains both glyburide and metformin, combine different oral drugs in a single tablet.