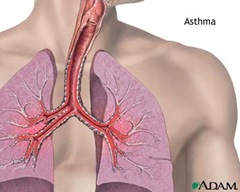 Asthma is a chronic, reversible, obstructive airway disease, characterized by wheezing. It is caused by a spasm of the bronchial tubes, or the swelling of the bronchial mucosa, after exposure to various stimuli.

Asthma is the most common chronic disease in childhood. Most children experience their first symptoms by 5 years of age.

1. Extrinsic Asthma – called Atopic/allergic asthma. An “allergen” or an “antigen” is a foreign particle which enters the body. Our immune system over-reacts to these often harmless items, forming “antibodies” which are normally used to attack viruses or bacteria. Mast cells release these antibodies as well as other chemicals to defend the body.

2. Intrinsic asthma – called non-allergic asthma, is not allergy-related, in fact it is caused by anything except an allergy. It may be caused by inhalation of chemicals such as cigarette smoke or cleaning agents, taking aspirin, a chest infection, stress, laughter, exercise, cold air, food preservatives or a myriad of other factors. 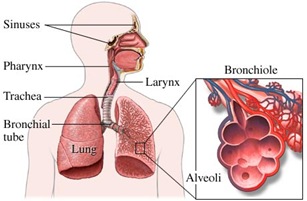 The lower respiratory tract consist of the bronchi, bronchioles and the lungs.

The major function of the respiratory system is to deliver oxygen to arterial blood and remove carbon dioxide from venous blood, a process known as gas exchange.

The neural system, composed of three parts located in the pons, medulla and spinal cord, coordinates respiratory rhythm and regulates the depth of respirations

The chemical processes perform several vital functions such as:

The normal functions of respiration O2 and CO2 tension and chemoreceptors are similar in children and adults. however, children respond differently than adults to respiratory disturbances; major areas of difference include:

a. Decreased for expiratory volume (FEV)

2. Administer prescribed medications, such as bronchodilators, anti-inflammatories, and antibiotics

4. Explain the possible use of hyposensitization therapy

5. Help the child cope with poor self-esteem by encouraging him to ventilate feelings and concerns. Listen actively as the child speaks, focus on the child’s strengths, and help him to identify the positive and negative aspects of his situation.

6. Discuss the need for periodic PFTs to evaluate and guide therapy and to monitor the course of the illness.

8. Refer the family to appropriate community agencies for assistance.