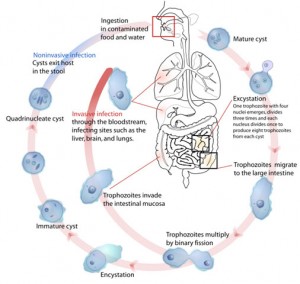 Amoebiasis protozoal infection of human beings initially involves the colon, but may spread to soft tissues, most commonly to the liver or lungs, by contiguity or hematogenous or lymphatic dissemination.

Amoebiasis is the third leading parasitic cause of death worldwide, surpassed only by malaria and schistosomiasis. On a global basis, amoebiasis affects approximately 50 million persons each year, resulting in nearly 100,000 deaths.

Period of Communicability: The microorganism is communicable for the entire duration of the illness.

Food or drinks maybe contaminated by cyst through pollution of water supplies, exposure to flies, use of night soil for fertilizing vegetables, and through unhygienic practices of food handlers.

Amebiasis is an intestinal illness that’s typically transmitted when someone eats or drinks something that’s contaminated with a microscopic parasite called Entamoeba histolytica (E. histolytica). The parasite is an amoeba, a single-celled organism. That’s how the illness got its name — amebiasis.

In many cases, the parasite lives in a person’s large intestine without causing any symptoms. But sometimes, it invades the lining of the large intestine, causing bloody diarrhea, stomach pains, cramping, nausea, loss of appetite, or fever. In rare cases, it can spread into other organs such as the liver, lungs, and brain.

I. Structure. The GI System 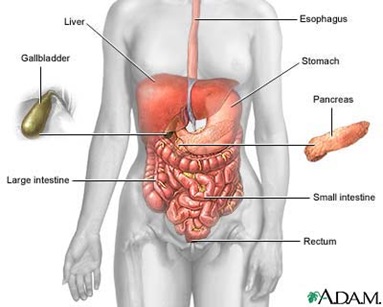 B. The esophagus is a muscular tube extending from the pharynx to the stomach.

a. The upper esophageal sphincter at the cricopharyngeal muscle.

b. The lower esophageal sphincter (LES), or cardiac sphincter, which normally remains closed and opens only to pass food into the stomach.

C. The Stomach is a muscular pouch situated in the upper abdomen under the liver and diaphragm. Te stomach consists of three anatomic areas: the fundus, body (i.e., corpus), and antrum (i.e., pylorus)

D. Sphincters. The LES allows food to enter the stomach and prevents reflux into the esophagus. The pyloric sphincter regulates flow of stomach contents (chyme) into the duodenum.

1. The cecum is a blind pouch that extends from the ileocecal valve to the vermiform appendix.

2. The colon, which is the main portion of the large intestine, is divided into four anatomic sections: ascending, transverse, descending and sigmoid.

3. The rectum extends from the sigmoid colon to the anus.

G. The ileocecal valve prevents the return of feces from the cecum into the small intestine and lies at the upper border of the cecum.

H. The appendix, which collects lymphoid tissues, arises from the cecum.

I. The GI tract is composed of five layers.

1. An inner mucosal layer lubricates and protects the inner surface of the alimentary canal.

2. A submucosal layer is responsible for secreting digestive enzymes.

3. A layer of circular smooth muscle fibers is responsible for movement of the GI tract.

5. The peritoneum, an outer serosal layer, covers the entire abdomen and is composed of the parietal and visceral layers.

A. Digestion of food and fluid, with absorption of nutrients into the bloodstream, occurs in the upper GI tract, stomach and small intestines.

1. Digestion begins in the mouth with chewing and the action of ptyalin, an enzyme contained in saliva that breaks down starch.

2. Swallowed food passes through the esophagus to the stomach, where digestion continues by several processes.

a. Secretion of gastric juice, containing hydrochloric acid and the enzymes pepsin and lipase ( and renin in infants)

b. Mixing and churning through peristaltic action

3. From the pylorus, the mixed stomach contents (i.e. chyme) pass into the duodenum through the pyloric valve.

4. In the small intestine, food digestion is completed, and most nutrient absorption occurs. Digestion results from the action of numerous pancreatic and intestinal enzymes (e.g., trypsin, lipase, amylase, lactase, maltase, sucrase( and bile. 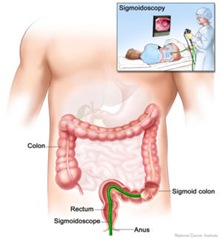 Diagnosis of amoebiasis can be very difficult. One problem is that other parasites and cells can look very similar to E. histolytica when seen under a microscope. Therefore, sometimes people are told that they are infected with E. histolytica even though they are not. Entamoeba histolytica and another ameba, Entamoeba dispar, which is about 10 times more common, look the same when seen under a microscope. Unlike infection with E. histolytica, which sometimes makes people sick, infection with E. dispar does not make people sick and therefore does not need to be treated.

A blood test is also available but is only recommended when your health care provider thinks that your infection may have spread beyond the intestine (gut) to some other organ of your body, such as the liver. However, this blood test may not be helpful in diagnosing your current illness because the test may still be positive if you had amoebiasis in the past, even if you are no longer infected now.