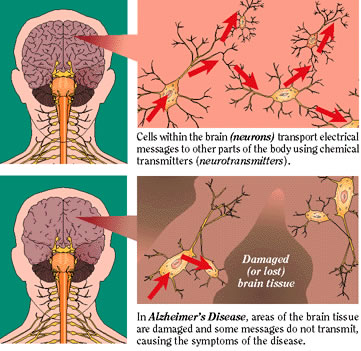 by: Ma. Minelli Pichay
Our Lady of Fatima University

I. Introduction:
Dementia is a brain disorder that seriously affects a person’s ability to carry out daily activities. The most common form of dementia among older people is Alzheimer’s disease (AD), which initially involves the parts of the brain that control thought, memory, and language. Although scientists are learning more every day, right now they still do not know what causes AD, and there is no cure.

Scientists think that as many as 4.5 million Americans suffer from AD. The disease usually begins after age 60, and risk goes up with age. While younger people also may get AD, it is much less common. About 5 percent of men and women ages 65 to 74 have AD, and nearly half of those age 85 and older may have the disease. It is important to note, however, that AD is not a normal part of aging.

AD is named after Dr. Alois Alzheimer, a German doctor. In 1906, Dr. Alzheimer noticed changes in the brain tissue of a woman who had died of an unusual mental illness. He found abnormal clumps (now called amyloid plaques) and tangled bundles of fibers (now called neurofibrillary tangles). Today, these plaques and tangles in the brain are considered signs of AD.

II. Definition:
Alzheimer’s disease is characterized by progressive cognitive decline and memory loss. Individuals who suffer from Alzheimer’s Disease will have difficulties with activities of daily living and need full time assistance in the later stages of the disease. It accounts for 50-60% of all dementia cases in the elderly.  Alzheimer’s is a unique condition that is not the result of common aging and natural senility.

The brain tissue in Alzheimer’s patients has a specific pattern of degeneration marked by senile plaques and neurofibullary tangles.  There is also a loss of neurons in the cerebral cortex, hippocampus, and subcortical structures, such as the locus caeruleus and nucleus raphe dorsalis.  An increase in beta-amyloid proteins is thought to contribute to the disease as well.  This increase is pararlleled with a marked decrease in brain neurotransmitters, with acetylcholine being affected the greatest.

The distinct cause of Alzheimer’s disease is not completely known. There is a familiar pattern in 15-20% of the cases. For the other 80-85% of cases there are several causal relationships. A genetic etiology is suspected in some individuals, due to findings of an increase in certain proteins in the brain that are coded for on specific chromosomes (1, 14, 19, and21). The most significant findings are with the protein apolipoprotein E. Certain forms of the protein (e4-type) are linked with greater incidence, while one form (e2-type) is associated with a more protective effect.Environmental factors are also suspected to play a role in the development of Alzheimer’s disease with specific attention to heavy metal toxicity, oxidative damage, and abnormal hormone metabolism.

What Causes AD?
Scientists do not yet fully understand what causes AD. There probably is not one single cause, but several factors that affect each person differently. Age is the most important known risk factor for AD. The number of people with the disease doubles every 5 years beyond age 65.

Family history is another risk factor. Scientists believe that genetics may play a role in many AD cases. For example, early-onset familial AD, a rare form of AD that usually occurs between the ages of 30 and 60, is inherited. The more common form of AD is known as late-onset. It occurs later in life, and no obvious inheritance pattern is seen in most families. However, several risk factor genes may interact with each other and with non-genetic factors to cause the disease. The only risk factor gene identified so far for late-onset AD is a gene that makes one form of a protein called apolipoprotein E (ApoE). Everyone has ApoE, which helps carry cholesterol in the blood. Only about 15 percent of people have the form that increases the risk of AD. It is likely that other genes also may increase the risk of AD or protect against AD, but they remain to be discovered.
Scientists still need to learn a lot more about what causes AD. In addition to genetics and ApoE, they are studying education, diet, and environment to learn what role they might play in the development of this disease. Scientists are finding increasing evidence that some of the risk factors for heart disease and stroke, such as high blood pressure, high cholesterol, and low levels of the vitamin folate, may also increase the risk of AD. Evidence for physical, mental, and social activities as protective factors against AD is also increasing.