Neurotransmitters and How They Work 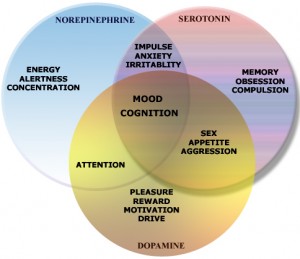 Nerve cells arranged in networks communicate information with one another through neurotransmission which is the conduction of electrical messages from neuron to neuron. The electrochemical messages cross the synapses between neural cells by way of special chemical messengers called neurotransmitters. Neurotransmitters are chemicals found and produced in the brain to allow the transmission of impulses from one nerve cell to the next across synapses. They aid in the conduction of information throughout the body. These chemicals fit into specific receptor cells embedded in the membrane of the dendrite that either fuel up or excite action in the cells (excitatory) or stop or inhibit an action (inhibitory). Presence or absence of these neurotransmitters can directly or indirectly have an effect on neurons in a specific portion of the brain. Thus, the levels of these chemicals in the brain have an effect to a person’s behavior.

Nerve cell conduction or communication is an extremely rapid process which involves the following:

What happens after neurotransmitters sent the information?

After they served their purpose of being released into the synapse and relaying the messages to the receptor cells, they are transported back from the synapse to the axon to be stored for later use which is a process called reuptake. If the neurotransmitters will not undergo reuptake, they will be metabolized and inactivated by enzymes, primarily monoamine oxidase.

This is the first neurotransmitter discovered which is found in the brain, spinal cord and particularly at the neuromuscular junction of the skeletal muscle of the peripheral nervous system. The mechanism of action of acetylcholine could either be excitatory or inhibitory. Acetylcholine is synthesized from dietary choline found in red meat and vegetables. Research and studies have linked the incidence of Alzheimer’s disease with decreased acetylcholine secretion in the neurons.