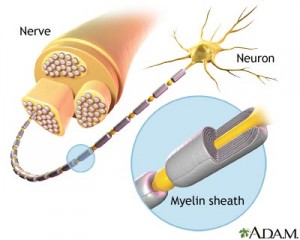 Anatomy of the Brain

Our brain has tiny parts known as neurons that contain two portions: dendrites and axons. The dendrites of a neuron are branched, tubelike-extensions within the cell body in the form of a structure identical to the limbs of a tree. Most part of the neuron cell bodies contain almost six primary dendrites, each is about two to three times thicker as the axon of the cell. The distance separating the cell body to the edge of the dendrites is approximately 0.5 millimetre. Dendrites are complex structures for obtaining impulses. They’re similar to mailboxes, usually provided by the axon of a different neuron. Dendrites and axons usually don’t quite touch one another. In most of the cases, they’re divided by a tremendously confined space known as the synaptic cleft, which nerve impulses are transmitted. These types of areas in which a neuron interacts with one another are classified as synapses.

The axon, also referred to as the nerve fibre, can be described as a tubelike extension of a neuron cell body. The axon is specialized to transport messages. An axon of a single neuron regularly has adequate branches to help make contact with as much as a thousand other neurons. The majority of axons in the central nervous system are underneath 1 millimetre long. Nonetheless, a lost of axons inside the peripheral nervous system are lenghtier. As an example, the axons that expand within the spinal cord to the muscles in the feet may be 75 to 100 centimetres long. The structures also commonly known as nerves are in fact packs of axons placed next to each other in a cordlike structure. Nerves may be made up of the axons of motor neurons or sensory neurons, or both. Several axons are protected by a sheet of white, fatty matter known as myelin. The myelin improves the speed of impulses across the axons. Myelin additionally can cause the distinction between the grey matter and white matter in the nervous system. Grey matter are made up of unmyelinated axons (axons without myelin sheaths) and also neuron cell bodies. White matter is composed vastly of axons that have white sheaths of myelin. Myelin is developed in the peripheral nervous system by Schwann cells, special supporting cells surrounding the axons. In the central nervous system, supporting cells known as glia produces myelin.

Neurons send messages in an electrochemical manner – chemicals or ions bring about an electrical impulse. Both neurons as well as muscle cells have the property to be electrically excitable, so they can send electrical nerve impulses which are brought about because of certain events in the cell membrane.

The nervous system primarily works by carrying out an electrical impulse or a signal through the length of a nerve and sends it across the synaptic cleft to a muscle fibre or to another nerve. As soon as a nerve impulse gets to the terminus of a nerve, a flood of ions endorses the discharge of vesicles that have neurotransmitters (like acetylcholine), which then allows this messenger molecule to spread throughout the synaptic cleft and attach to specific receptors.