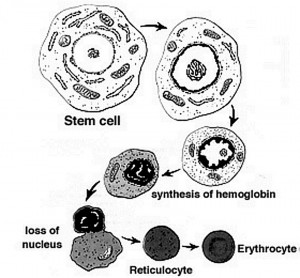 Red Blood Cells (RBC’s) also called erythrocytes, are oxygen carrying cells. It is derived from the Greek words “erythros” meaning “red,” “kytos” meaning “hollow” and “cyte” translated as “cell” in modern language. These cells are anuclaeted (without nucleus) and contain hemoglobin. Hemoglobin is the iron-containing component of the RBC and is responsible for oxygen transport.

Erythrocytes are produced in the red marrow, a process known as ERYTHROPOIESIS. Red marrow is the site of active blood cell production and constitutes as the major blood-producing organ. This organ is highly vascular and it consists of connective tissues that contain free cells. The simplest structures of free cells are called stem cells. The stem cells are the precursor of two different cell lines namely:

The kidney is responsible for initiating the red blood cell production. Juxtaglomerular cells are present inside the kidneys. These cells are sensitive to the levels of oxygen in the blood. Low levels of oxygen detected in the blood (hypoxemia) delivered in the renal arterial supply stimulates the juxtaglomerular cells in the kidney to release erythrogenin. Erythrogenin is a renal erythropoietic factor that stimulates the kidney to form, produce and release the very important hormone in red blood cell production, erythropoietin (EPO).

Erythropoietin is the hormone that stimulates red blood cell production in the red marrow. Mature red blood cells are formed from stem cells in the bone marrow. With the presence of erythropoietin, red cell pathway starts to form proerythroblast from stem cells. At this point the cell still contains nucleus. However, as the development progresses the nucleus becomes smaller and the cytoplasm becomes basophilic due to the presence of ribosome, thus the cell is now called basophilic erythroblast. As the cell becomes older it also becomes smaller and eventually when it begins to produce hemoglobin it is now termed as polychromatic erythroblast. Later on the cytoplasm will become more eosinophilic and the cell is now called orthochromatic erythroblast, which will then extrude its nucleus as the cells slowly fill with hemoglobin before entering the circulation as reticulocytes. Reticulocytes will mature to form the anucleated red blood cells.

Final reticulocyte maturation takes place in the bloodstream. Within a few days the reticulocytes completely loses all its nuclear components and becomes a mature red blood cell. In a blood sample, reticulocytes can be differentiated from RBC’s because the former still contain flecks of their nucleus. The lifespan of a fully mature RBC is 4 months or 120 days. After this period, the old and damaged RBCs are removed from the circulation by macrophages in the spleen and liver.

Dietary elements are essential for RBC production. The following are needed by the red marrow to produce erythrocytes: