The activity of every cell and organs of our bodies are influenced by the release of certain chemicals that are used to control and carry out certain bodily functions. Such is the power of the second great controlling system of the body, the endocrine system. Mood regulation, growth and development, functions of the tissue, metabolism, sexual function and processes are reliant on the endocrine system.

Yes, it is agreeable and definitely true that slow body processes such as growth of the cells and faster bodily processes like breathing and movement of the body are controlled by the nervous system. However, though separate, the endocrine system and the nervous system most of the time works with each other to carry out bodily functions properly. The endocrine system regulates processes that go on for a lengthy and in some cases continuous periods. 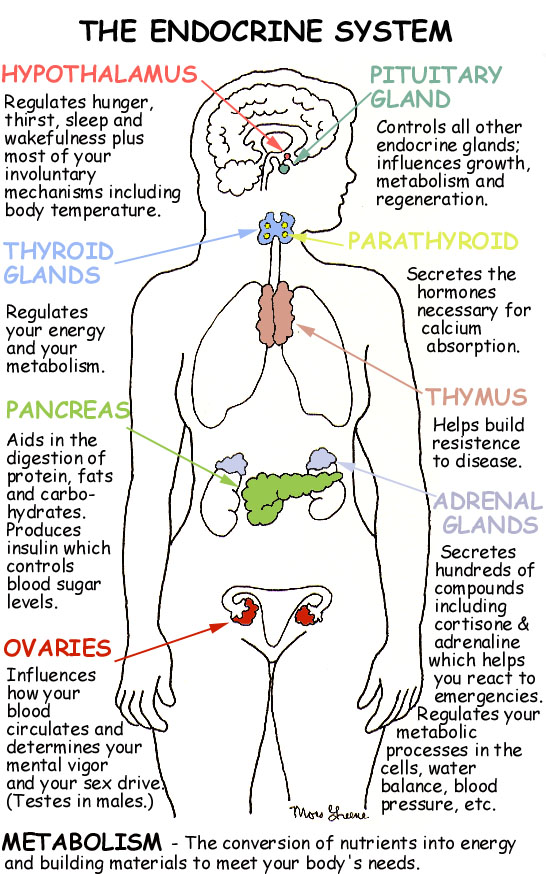 What is an Endocrine System?

The endocrine system regulates body processes slower than the nervous system. If the latter body system uses nerve impulses to make immediate action, the former body regulating system acts by the use of chemical messengers called HORMONES, which are released into the blood to be transported leisurely throughout the body that may affect one or several organs. Glands make up the endocrine system and are responsible for producing and secreting hormones. The major glands of this body system are the following:

Hormones are the chemical messengers that transmit information from one cell to another and coordinate bodily functions. The term hormone comes from a Greek word which means “to arouse.” This chemical is the key to the incredible power of the endocrine system! It may be defined as chemical substances that are secreted by cells into the extracellular fluid and regulate metabolic activity of other cells in the body.

A certain hormone affects only a specific tissue cells or organs called target cells or target organs, although the blood borne hormone circulates to all the organs of the body. For the target cells or organs to respond to a hormone, specific protein receptors must be present on its plasma membrane or in its interior to which that hormone can attach. The chemical messengers can ONLY influence the workings or function of a cell when the binding would take place.

After hormone binding occurs, cellular activity is altered by either increasing or decreasing its normal rate, or maintaining its usual metabolic process or a new process is stimulated. Certain changes that will take place after the binding process depends on the specific hormone and the type of target cells directed. However, either of the following would usually occur:

S – Synthesis of proteins or certain regulatory molecules, such as enzymes, in the cell

Changes in cells are triggered by two mechanisms depending on the type of hormone. Being a lipid-soluble molecule, the steroid hormones’ mechanism of action is through direct gene activation. The order of processes involved are the following: (S-T-A-R-T-S)

T – Travels and enters the nucleus, once the hormone is inside the target cells.

A – Attaches to a specific protein receptor inside the target cells.

R – Rushes (hormone-receptor complex) to bind to specific sites on the cell’s DNA.

S – Synthesis of new proteins is produced by translating the mRNA in the cytoplasm.

Protein and peptide hormones, otherwise known as non-steroidal hormones, are unable to enter the target cells. To produce an effect, these amino acid-based chemicals bind to the receptors situated on the plasma membrane of target cell. Thus, a second-messenger system is utilized. The following events take place during the process:

B – Binding of hormone to the membrane receptor takes place.

A – A series of reactions sets off that activates an enzyme.

S – Second messenger is produced in this case called cyclic AMP or cAMP, also known as cyclic adenine monophosphate, through a catalyzing reaction.

E – Existing cyclic cAMP then oversees additional intracellular changes that promote the typical response of the target cell to the hormone.